Back from the Eddy Hunt

As part of the Helmholtz Environmental Observation Programme MOSES, researchers from the GEOMAR Helmholtz Centre for Ocean Research Kiel and the Helmholtz-Zentrum Geesthacht Centre for Materials and Coastal Research have carried out detailed investigations of ocean eddies in the tropical Atlantic Ocean over the past four weeks using the research vessel METEOR, the research airplane Stemme from the Aachen University of Applied Sciences and a large number of autonomous devices. The expedition ends today in the port of Mindelo, Cape Verde. 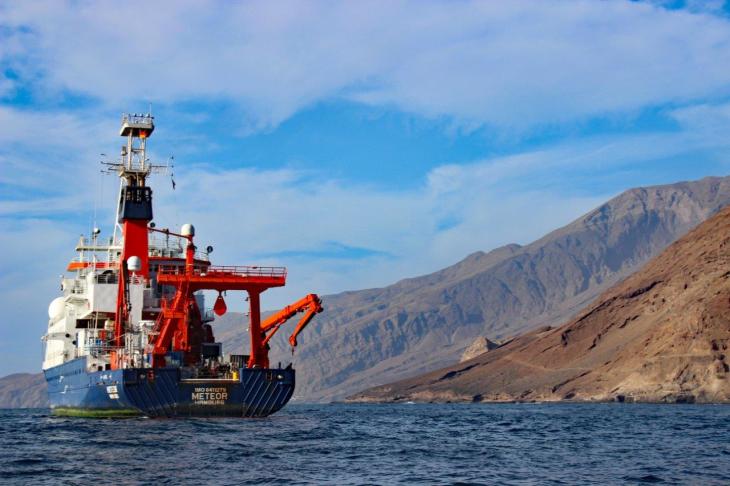 Research vessel METEOR on the way back to the port of Mindelo (Sao Vicente, Cape Verde) in in the bay of Tarrafal. Photo: Arne Körtzinger/GEOMAR

Months in advance, the researchers had already used satellite data and prediction models to look for eddies that had formed off the West African coast in the summer and were suitable for the investigations. "Weeks before the expedition, we had sent out autonomous measuring instruments to the eddies that had been shortlisted, in order to check their salt and oxygen concentrations in advance," says Prof. Dr. Arne Körtzinger from GEOMAR, cruise leader on board METEOR during the eddy hunting.

In the end, from 22 November onwards the team concentrated on two eddies: one that passed southwest of Cape Verde and one that the team intercepted northeast of the island of Sal.

Above and under water: research vessel and measuring instruments

On this plot, the route of the research vessel METEOR is clearly visible. The two eddies which the scientists investigated were accordingly located north-east and south-west of Cape Verde. Image: GEOMAR

During the ship expedition, the team used an unusually large number of observation and sampling devices to record and understand as many processes inside and outside the eddies as possible. For example, two sailing sensor platforms (saildrones), two wavegliders driven by wave energy and up to eleven diving ocean gliders were deployed simultaneously around the METEOR. In addition, drifting sediment traps of the MARUM from Bremen, a measuring chain of the HZG towed behind the METEOR, several special cameras for the detection of organisms and particles in the water and many other sensors were used. "None of those involved has ever worked with such a large number of different instruments and methods in parallel. The effort and the need for coordination were enormous. But it was worth it," emphasizes Professor Körtzinger. "We now have possibly the most comprehensive data set on physical, biogeochemical and biological processes in oceanic eddies ever collected". In addition, the various working groups on board have learned a lot from each other during the cruise, the marine chemist adds: "We were able to improve some of the observation approaches while still on board and exploit synergies between different methods".

In the air: Research airplane Stemme

From the air, the expedition was also a real adventure: The scientists of the HZG had first set up their land station on the island of Sal and from there they flew to the first eddy with the research airplane Stemme of the FH Aachen. However, this was difficult to reach, the weather conditions were not ideal. When the METEOR approached the second eddy, scientists, engineers and the Stemme crew moved to the island of Fogo without further ado, which was not at all easy. "Because of too high waves we couldn't take the ferry, but flew with the equipment - unfortunately, some of the equipment didn't arrive, so we had to improvise a bit", says Prof. Burkard Baschek from the HZG, who coordinated the air component. "We were able to fly less frequently than we would have liked, but in the end it all comes down to one thing: that we had perfect measuring days at the same time as the METEOR, where we collected unique and valuable data". The edges of the Fogo eddy could be measured and the scientists have found some very interesting structures. "The planning and coordination of the various devices, the METEOR and the Stemme were extremely difficult - it's great what we have achieved together," said Professor Baschek happily.

Almost until the last day the team sampled the eddy southwest of the island of Fogo before the METEOR reached the port of Mindelo again today. "We are exhausted, but also very happy and a little proud of what we have achieved", says Körtzinger, "and now everybody is looking forward to Christmas". Immediately after the holidays, the evaluation of the data and samples obtained will begin in the home institutes in Kiel, Geesthacht, Bremen, Hamburg and Kaiserslautern.

Tip: #MOSESeddyhunt in the social media

During the expedition, the scientists managed to send short updates and photos besides their work. On Facebook, Twitter and Instagram you can see many great photos under the hashtag #MOSESeddyhunt and get an impression of the work. On oceanblogs.org/capeverde there are also many exciting blog posts.

Impressions of the "MOSES Eddy Hunt"