The nets are in place. As part of the Helmholtz Earth system observation programme MOSES, researchers from the GEOMAR Helmholtz Centre for Ocean Research Kiel and the Helmholtz-ZentrumGeesthacht , Centre for Materials and Coastal Research, are planning to investigate extremely low-oxygen eddies in the tropical Atlantic until Christmas. Autonomous devices are already scouting the ocean around the Cape Verde Islands for eddies suitable for study. On 23 November, the research vessel METEOR will leave the port of Mindelo for the detected eddies. A research aircraft will support the search from the air. 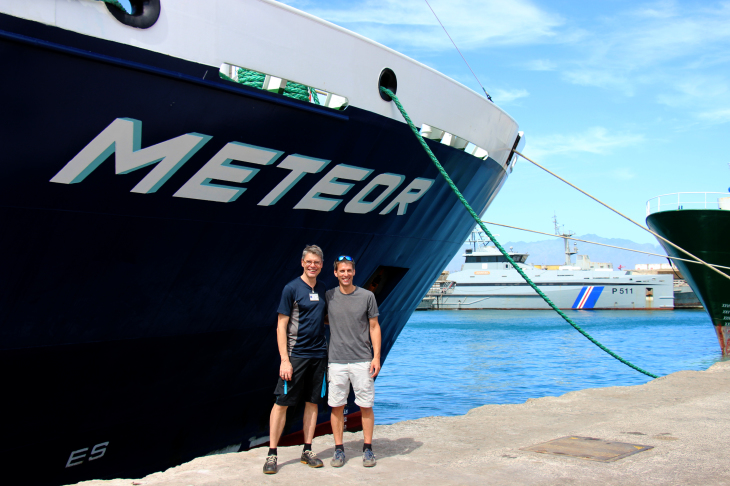 In 2010, marine researchers in Kiel were quite surprised. The Cape Verde Ocean Observatory (CVOO), a long-term observation station operated by them north of the Cape Verde island of São Vicente, recorded very low oxygen levels in the seawater that had never before been measured in the Atlantic. A measurement error? No. Satellite data and other observations revealed that an ocean eddy with a diameter of 100 kilometres had just passed the CVOO. Inside of it, extreme conditions obviously prevailed. 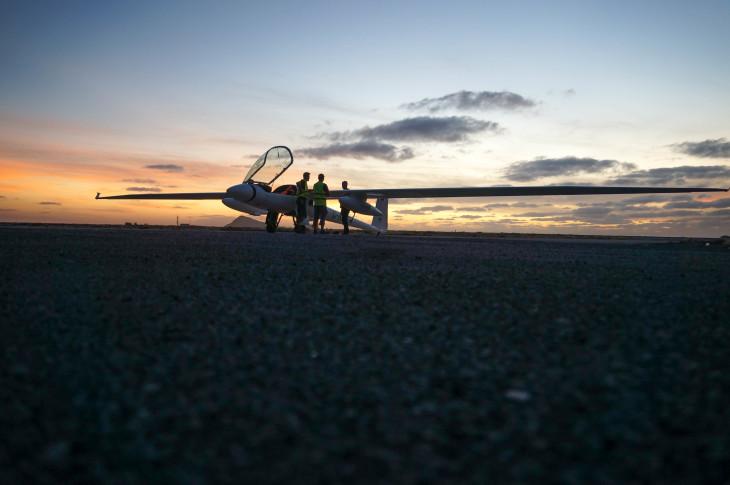 The island of Sal will form the basis for the research aircraft Stemme in the coming weeks. Photo: Burkard Baschek/HZG

In 2014, a team from the GEOMAR Helmholtz Centre for Ocean Research Kiel and the "Future Ocean" research network in Kiel succeeded for the first time in sampling such a mobile and relatively short-lived oxygen minimum zone directly. Now, a new, even more extensive measurement campaign wants to answer a number of open questions about the role of eddies in the ocean system. The campaign is part of the Earth system observation programme MOSES of the Helmholtz Association. This time, the Helmholtz-ZentrumGeesthacht Centre for Materials and Coastal Research (HZG) is also part of the team. The HZG has already carried out similar investigations on smaller coastal eddies as part of the "Expedition Clockwork Ocean". The complementary expertise of both research institutions is now brought together in the "MOSES Eddy Study II". 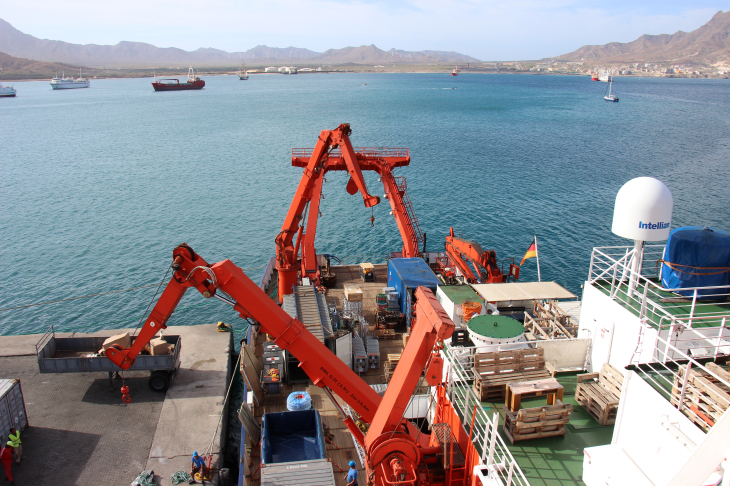 Currently, the research vessel METEOR is being loaded in the port of Mindelo for the expedition to the eddies. Photo: Arne Körtzinger/GEOMAR

The core of the new measurement campaign is an expedition with the German research vessel METEOR, which will start on 23 November in the port of Mindelo (Cape Verde). The researchers on board include groups from MARUM (Bremen) and the University of Kaiserslautern. For additional support from the air, the Aachen University of Applied Sciences has stationed the research motor glider Stemme S-10 VTX on the Cape Verde island of Sal. With its help, experts from HZG will locate and observe the eddies from the air and measure their interaction with the atmosphere.

"The more the research deals with eddies in the ocean, the more we realize that they play an important role in the distribution of energy, oxygen or nutrients, which has so far been insufficiently understood, and that they can also influence the physics and biogeochemistry of entire ocean basins," says Prof. Dr. Arne Körtzinger of GEOMAR, chief scientific of the METEOR expedition.

The sampling of the eddy in 2014 and the subsequent analysis of the data, for example, revealed processes that had previously not been observed in the Atlantic. This includes the natural production of considerable amounts of greenhouse gases due to special biochemical processes in the low oxygen zones. “This is changing our idea of element cycles in the Atlantic, which will ultimately also have an impact on our ocean and climate models,” emphasizes Körtzinger.

Understanding the interaction of eddies

His colleague Prof. Dr. Burkard Baschek, head of the Institute of Coastal Research at the HZG, confirms this. During the Expedition Clockwork Ocean in summer 2016, the coastal researchers from Geesthacht measured short-lived eddies near the coast from their formation to their decay. “We were able to prove that cold water inside the eddies is quickly transported upwards. The small eddies bring nutrients from deeper levels of the water column upwards to the surface. When they enter the sunlit surface layer, they provide ideal conditions for algae growth and thus are decisive for the beginning of the food chain and life in the sea. Now we want to measure and understand the interaction of the small eddies with the large ones,” says Baschek. 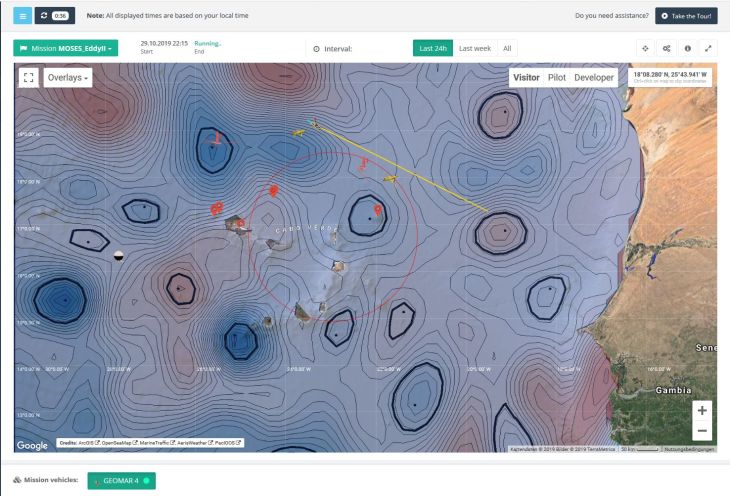 The approaching Eddies already in view: The GEOMAR Navigator shows the course of autonomous devices and anomalies on the sea surface. The red circle around the islands is the flight radius of the Stemme.

In order to use the scarce ship and aircraft time efficiently, researchers have been evaluating high-resolution satellite images and prediction models for weeks to identify suitable eddy candidates. The eddies form off the West African coast due to the interaction of wind, currents and coastal topography. From the coast, they migrate westwards into the open Atlantic, where some dissolve only after months. “Currently, there are several eddies on their way that are interesting for us,” says Professor Körtzinger. Weeks ago, the team set up a whole swarm of autonomous devices from the Ocean Science Centre Mindelo in order to investigate these candidates in advance. “In addition to our own equipment, we also use state-of-the-art saildrones. These are autonomous measuring platforms that move with the wind and have already measured over a distance of almost 4000 kilometres," explains Professor Körtzinger. 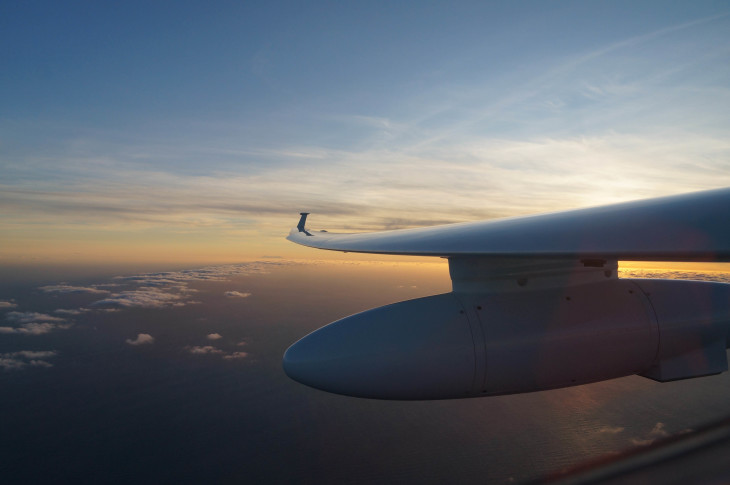 View from the research airplane STEMME in the airspace above the Cape Verde Islands. Photo: Burkard Baschek/HZG

In addition to the Helmholtz MOSES programme, the current eddy hunt is also part of the REEBUS project financed by the German Federal Ministry of Education and Research. “It is wonderful that we have been able to bring together so many different programmes and experts in order to jointly investigate the phenomenon of ocean eddies, which has so far hardly been understood, with the most modern equipment available," summarises Professor Körtzinger.

If you want to follow the eddy hunt you can do so on Twitter, Facebook or Instagram (hashtag: #MOSESeddyhunt). The autonomous devices used can be followed live on waveglider.geomar.de. In the "Cape Verde Blog" at www.oceanblogs.org researchers regularly report on their activities.